If you’re looking for some help in treating your dog’s behavioural problems, or just curious about why they do what they do, here you will find dog behaviour tips and advice on a variety of topics that will help you look after your best friend. 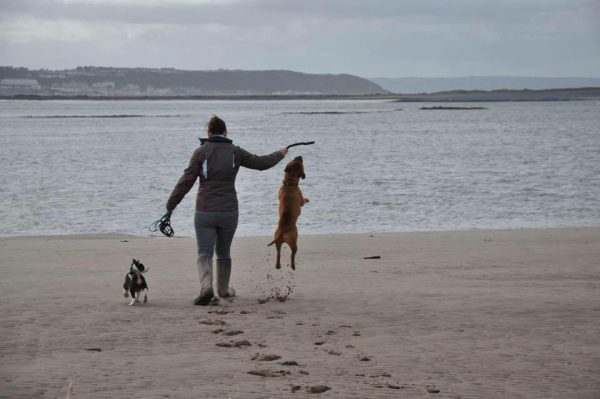 Follow the steps below to toilet train your puppy:

1) Start by taking your puppy outside to the same spot in your garden at the following times:

2) Accompany them out, be patient and as soon as they begin to toilet say a chosen phrase such as ‘hurry up’ or ‘be quick’. When they have finished, give them some praise or a treat and take them inside again. Try to avoid leaving a door open for your puppy, if you do it will be difficult for them to understand the distinction between indoors and outdoors.

3) You should watch for signs of impending toileting in the house such as circling, sniffing or getting ready to squat. If these occur, interrupt your puppy immediately and lead them outside of the house (do not carry them).

4) If you do catch your puppy toileting in the house, shout loudly enough to interrupt them but so as not to terrify them. Immediately run to the back door calling your puppy enthusiastically, and take them outside to the toileting area.
If your puppy has made a mess in the house do not shout or attempt to punish them – they will not associate the act of toileting with the punishment and it will only cause your puppy stress and anxiety. The best way to clean up accidents is with a solution of biological washing powder, this is highly effective in removing the scents of any fatty deposits, which may cause your puppy to toilet again in the same area.

5) If your puppy asks to go out in the night, take them out for the normal amount of time then put them back to bed so that they do not view it as a means of getting attention.

If there are times when you are unable to supervise your puppy around the house, then it is best to confine them to a puppy pen.

A puppy’s socialisation period is from the age of 4 to 18 weeks. This is the period when they are most receptive to new experiences and what they experience during this time will shape their attitude and character for the rest of their lives.

Your puppy will not be fully protected by its vaccinations until one week after their second injection. This will be 11 weeks at the earliest, near the end of their socialisation period.

This means that most of your puppy’s socialising must be done whilst they are not fully immunised. This can be done safely by avoiding contact with strange dogs, or places that they may have soiled e.g. streets and parks. A suitable solution would be to carry your puppy in these places so that they are reaping the benefits of new and exciting surroundings whilst still being kept safe.

Your puppy needs to meet as many people as possible, for example children (with supervision), senior citizens, people in uniform, people with beards, joggers and cyclists, etc. It is also a good idea for them to encounter people who love dogs, as they will approach your puppy directly and with lots of eye contact, and also those that are not so keen on dogs. You can help to make the meetings as pleasurable as possible for your puppy by encouraging people to give them a titbit or playing with your puppy.

Meeting healthy, friendly, adult dogs in a safe environment (your garden or house) is essential for puppies. Puppy parties and puppy socialisation classes are an excellent for allowing your puppy to interact with younger dogs, giving them some of the experiences they would have acquired from staying with their litter mates for longer. If you live in a rural setting it is a good idea to get your puppy used to livestock. Take your puppy to an area where they can see livestock; make sure that your puppy is on a lead, and under control, so that they cannot give chase. Ignore the livestock yourself and engage your puppy in a game or some training, this way they will learn that the livestock are a lot less interesting than you.

Your puppy needs to be familiarised with anything that they could encounter in adult life. Examples could include car, bus and train journeys, vacuum cleaners, cyclists, thunder and fireworks. Remember that all of these experiences should happen in a fun and positive way. We recommend using Sounds Scary! This is an easy to follow CD therapy pack for dogs, which includes 2 CD’s, and an information book with an easy to follow guide. Play the CD’s to your puppy over an extended period of time, starting at a very low volume and increasing gradually. This will help to accustom your puppy to sounds that they may only hear a few times a year, such as fireworks.

If your puppy becomes fearful or apprehensive at any time, do not act sympathetically, fearful behaviour should be ignored. Trying to soothe a fearful dog not only rewards the behaviour, but also gives the impression that you are also worried about the situation. Seeing you act in this way further undermines you puppy’s confidence. Never punish or get cross with a fearful puppy, because this will only make your puppy more afraid. Instead jolly them along with a game or titbit, whilst reducing the intensity of the experience.

Learning to be alone for more than 5 minutes!

Adaptil collars and diffusers which help calm anxious dogs via pheromones, can help with the management of behavioural problems such as separation anxiety in dogs, but you also need to change some keys things in how you interact with your dog if you are going to help teach your dog to cope when you have to leave it to go to the shops, work, bed etc.

As with many behavioural problems there is no quick fix solution but with a dedicated and patient owner separation anxiety can be totally resolved.

The single most important fact to remember is never to punish the dog on returning to the house, no matter what has happened.

Some people mistakenly believe that getting another dog as a companion will alleviate their first dog’s loneliness when they are out. This may work in a dog which has suddenly lost a companion but rarely works in other cases.

The behaviour sometimes occurs when the owners are in the house, but have shut the dog away from them overnight. It can also occur in cars, although dogs which are destructive in cars do not necessarily show the behaviour in the house & vice versa. The dog may not be destructive every time it is left alone. A common pattern is that it behaves normally during separations which occur routinely (such as when the owner goes to work) but may be destructive during unexpected separations.

The relationship between the owner & the pet has to be altered to decrease dependency of the pet on its owner. This can be started straight away.

Often pets with separation anxiety will follow their owners around the house – even to the extent of lying outside the bathroom when the owner is inside. They will lay at their owner’s feet or climb on their laps to enable close contact at all times.

In the early stages the dog may seem withdrawn or sulky. This is only temporary as the dog adjusts to a new way of life.

It is possible that these steps to decrease owner dependency will suffice to calm a dog to the point that it will not suffer from separation anxiety anymore. If not, the next step is for the owner to de-emphasise the importance of their departure & return.

De-emphasize the importance of departure and arrival and train the dog to be alone. This is best left to when you have some time to spare and the effects of stage 1 are becoming apparent.

To desensitise dogs to being left, the owner must break down their actions in detail. Many an owner compounds the anxiety of a dog when leaving by prolonging the goodbye, cuddling, sweet talking & giving extreme love. All this just heightens the anxiety in a dog.

Dogs have no concept of time they feel the same whether they are left for 20 minutes or 2 hours.

A dog which whines or barks when left is only trying to maintain contact with its owner, to call him back. It is just like a pup calling for its mother. The only answer is to desensitize the dog to the departure of its owner, which must be undertaken calmly & in the knowledge that it is time consuming business. It is repetitive, boring work – but ultimately very rewarding.

Intervention with drugs can be dramatically successful in initially assisting with some cases. Particularly when the problem is so severe that the owner is distressed beyond the point where long term but inevitably slow improvements have much appeal. (ACP, Diazepam, Selgian, Clomipramine.) 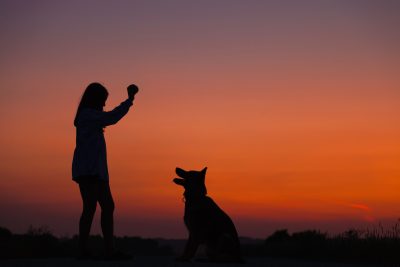