Meet Ondrej and his patient, Elvis

We welcomed new vet, Dr Ondrej Ryjacek MVDr PGCertSAS MRCVS to Charter Vets over the summer months. Ondrej is an Advanced Practitioner in Small Animal Surgery and has a keen interest in this field.

He has been busy getting to know many of our clients such as Elvis, a 15 year old cat who certainly used up some of his nine lives when he accidentally fell out of a third floor window! 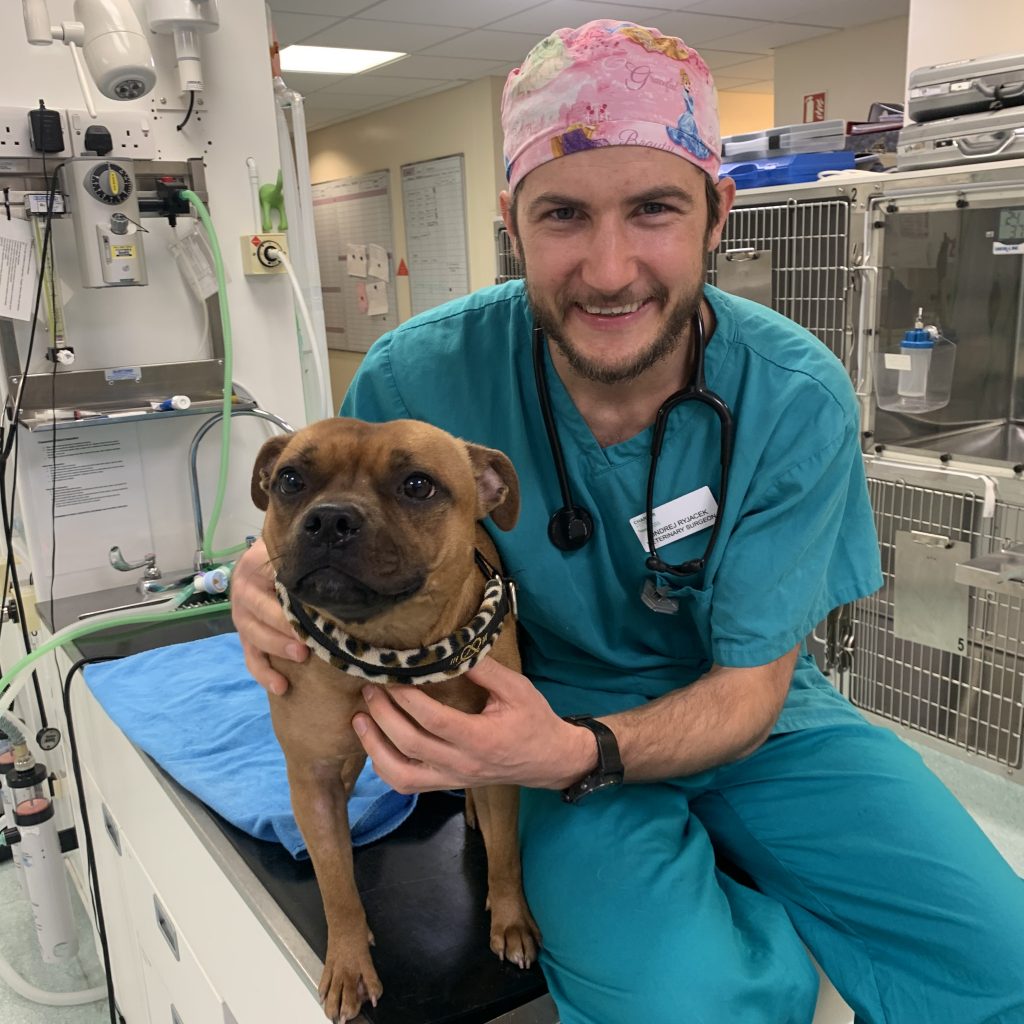 Elvis had an x-ray and CT scan which revealed a nasty pelvic fracture which was not possible to reconstruct (Pic 1 below). His hip socket was shattered and fragments had pushed into the pelvis resulting in severe narrowing of the pelvic canal.

Elvis’ dedicated owners did not give up on him and he underwent surgery. The head of the femur was removed in order to allow a false joint to form over the area of the damaged hip joint. Such a solution provides pain free movement. Dislocated pelvic fragments were retrieved from the canal using threaded pins and stabilised in their normal position using an external skeletal fixator. (Pic 2).

After two months of rest and regular check ups, all the pins have been removed and lucky Elvis is able to move around freely and comfortably.(Pic 3). 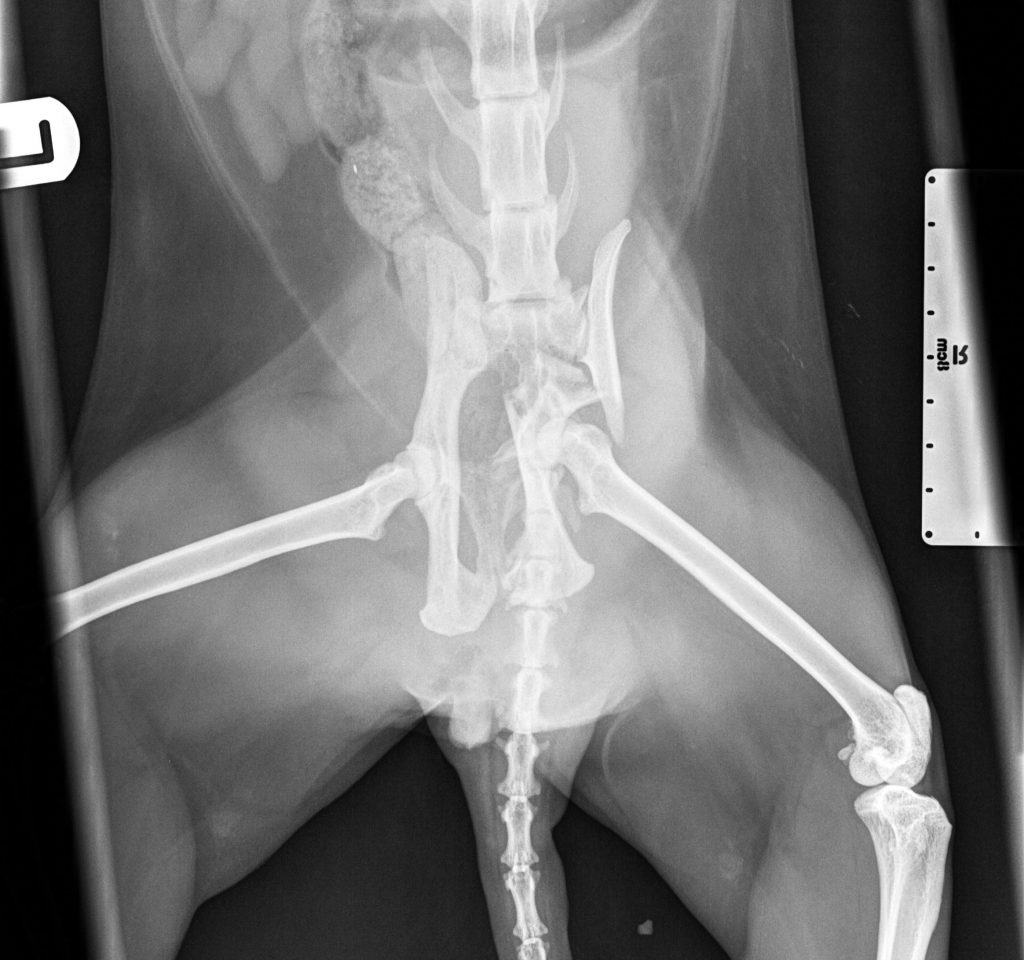 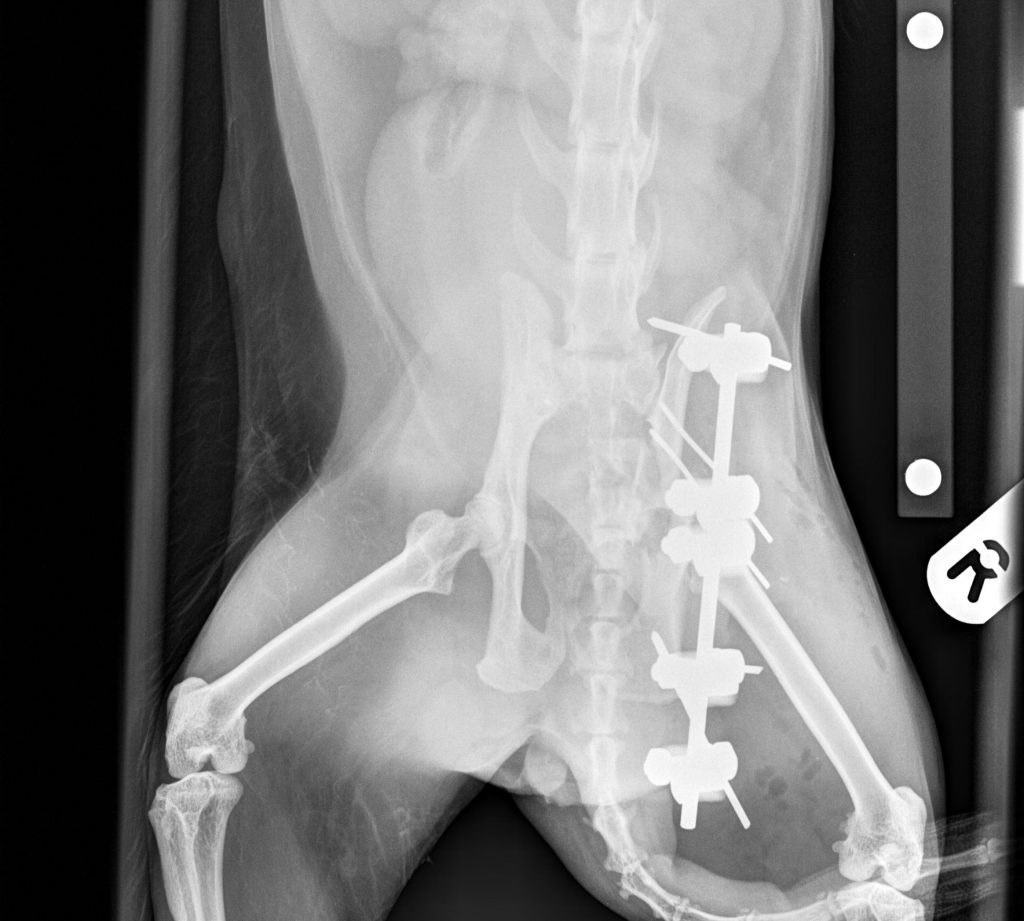 Elvis, who is now back to his old self, has taken the time to write to us; not only to thank Ondrej for his amazing work but also to give us an account of his recovery at home.  Take a read of excerpts below….

Elvis here. I just wanted to let you know how I felt about the operation and how much your skills and care have meant to me and my family. As you you know, I’d launched myself out of the bathroom window which ended me in your hospital. I was super glad that I could come and see you at an ungodly time of the morning (6.30am). By this time my friends had only just managed to hoick me out of the light well that I’d fallen into (by the way, don’t tell anyone but of course I was after those pesky seagulls on the roof next door).

I was in a lot of pain and I didn’t like being in the travel box as it always means that unpleasant things are about to happen. The x-rays you took were pretty shocking, I had done a lot of damage. My family were worried that I might never walk again or that I might not be able to recover from the injury at all. You however came up with a brilliant plan which gave me a good chance. I had the operation but was miserable in hospital. I was worried that I might not see my friends again and I was so unhappy that I didn’t really eat. This worried you and your staff and you considered that I might not be well enough to go home. Luckily for me you thought that maybe I’d be happier at home after three days in hospital. This turned out to be true and as soon as I was home I immediately ate two lovely tins of salmon food that they had bought for me to help me recover.

When I came home my friends had set up a recovery area for me in the lounge. It was designed to your specifications which worked really well for me. Although I had to poop and pee in the lounge, which I didn’t like, and in the beginning I needed help from my friends to stand up and do my business. My friends slept in the same room as me on a mattress for the first two weeks as I was pretty restless at night and would often need reassurance that I wasn’t alone and that I would be alright. In fact, in the beginning I didn’t want to be left alone at all and would call out if my friends would leave the room even for a minute.

My recovery area didn’t have a top/lid on to start with as I had not made an attempt to leave but I soon figured out how to nip out and try and do my perimeter checks. Sadly this meant that a lid was soon put on. On another occasion my friend had left the lid open in the night after I had called out and had done a big pooh (which they felt the need to clean up immediately). I think she may have been a bit exhausted as I had called out a lot and she had not had a lot of sleep. Anyway, I managed to get out and find my way into the bedroom and sleep with them. That was a nice surprise for them in the morning.

Yvonne works from home and the computer is not in the lounge. I didn’t like being on my own but Alexa looked after me for a bit and I did like her telling me that I was a good boy and she let me listen to bird sounds which was pretty fascinating and I did try to find them but never did a bird at all.

I am still annoyed that they will not open the bathroom windows for me. I keep telling them to open it by sitting in front of it, calling out, scratching the window but no luck. I’m thinking that if I persist, eventually they’ll give in and let me look out of the window at the seagulls again. I can see them from the balcony but it’s not the same as I can’t get to them that way.

I now spend most of my day on my throne and in the evenings I like laying in front of the fire or sitting on their laps. I also sleep with them on the bed again. I love running around the house and balcony at night. It’s especially brilliant to call out really loud when I slam through the cat-flap. I have been picked up a few times and immediately locked in a bedroom with Yvonne. I don’t know where Tony was, I think he may have barricaded himself in another bedroom so that he could sleep through the night and go to work. Of course I did scratch on the door for ages but he wouldn’t let me in. That is so weird as running around the house at night is a lot of fun. I think the neighbours like it too as they sometimes join in by banging on their ceiling.

My food bowl was once again moved to the kitchen but I didn’t like eating there anymore so I just didn’t eat until they eventually got the message and moved my bowl back to the lounge. It is still the lovely salmon which is great for me.

Lastly Ondrej, I just wanted to thank you for giving me my life back. I know I’m already 15 years old but I don’t feel it and in general I love life and spending time with my two friends. You’ve made this possible for me. Thank you. 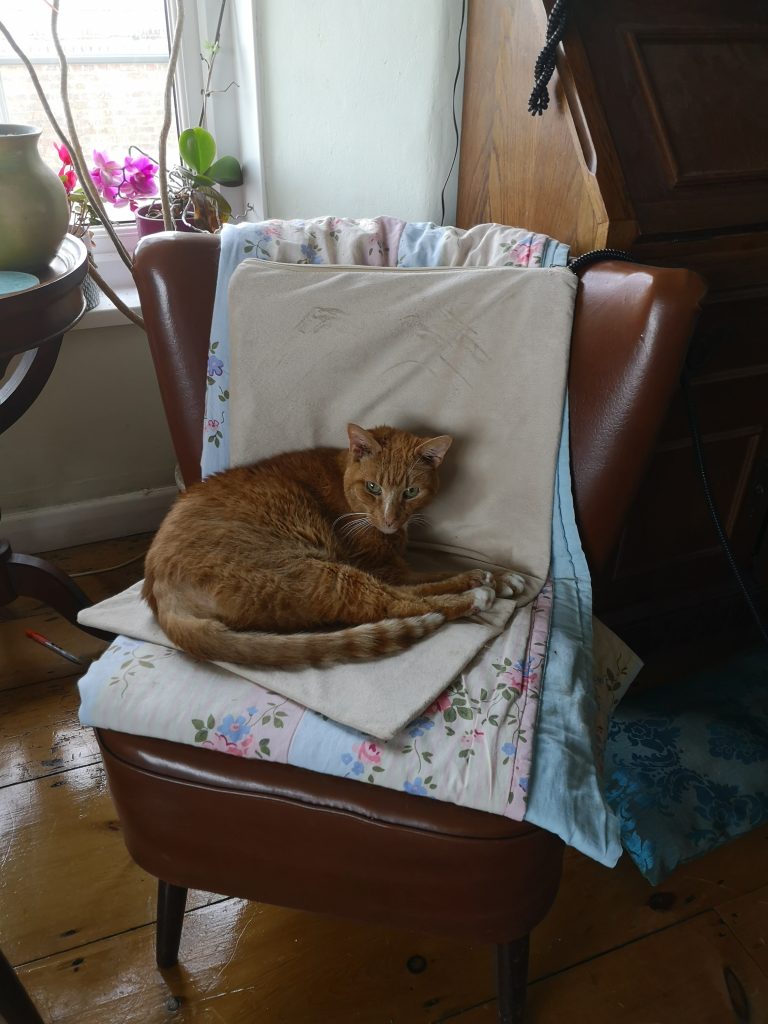